There are no onions without the bees

It does not make any sense trying to preserve a vegetal species without knowing about and trying also to preserve other species it depends on. Observing the beginning of the flowering of these ‘Berga’ variety onion plants I have observed that its main pollinator, at least here in Barcelona city, is a small halictid, probably of the genus Lasioglossum. Perhaps a Lasioglossum malachurum or a similar one. 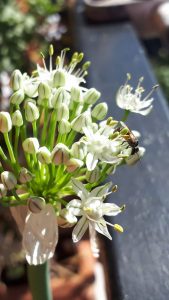 These small bees use to live in colonies with a reigning queen, but here in the Mediterranean many worker bees can also be fertile and have a behaviour more similar to that of the solitary bees. They make underground nests. Since they do not produce honey, not big attention is paid to them, but I have already observed such bees pollinating plants like stevia and melon. And…I will have to thank them for the onion seeds that I may collect after the floration, too. Thank you, little fairies!